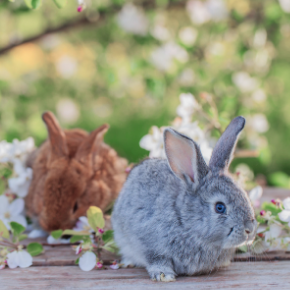 Do you know how to check your rabbit for worms?

Unlike cats and dogs, rabbits generally don’t require regular worming treatments as an infestation of worms is less common. That’s not to say they’re immune to catching a dose of worms though. Andy has some advice for rabbit owners on what to look out for.

The most common type of worm that affects rabbits is called the pinworm. Rabbits can become infected with pinworms by eating the faeces of another infected rabbit. Exposure typically occurs through the parent, or at the pet store, breeder, or shelter.

Pinworms, which can live in your rabbit undetected, aren’t a serious health threat and can’t be passed to humans (unless you eat undercooked rabbit meat). They can, however, cause itching and inflammation around your rabbit’s bottom.

Signs to look out for and how to check if your rabbit does have worms:

Although less common, there are two other types of worms that can affect rabbits. Andy explains:

Tapeworms can sometimes end up in rabbits (they tend to live in cats, dogs & foxes) if they’re grazing in areas contaminated by other animals’ faeces. It’s rare, but tapeworms can develop into cysts within rabbits and cause abdominal discomfort.

Stomach worms are also rare in rabbits. Weight loss is the main sign of an infection, as is seeing worms in your rabbit’s faeces if they’re carrying a large number of them.

If you suspect your rabbit might have worms, it’s a good idea to make an appointment as soon as you can.