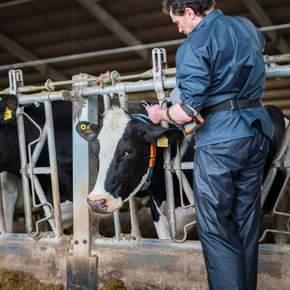 Bovine TB testing and the use of ancillary tests

In March we supported a meeting and farm walk by vet Dick Sibley who works with industry experts to try and update government policy on TB. An enlightening event showing undeniable parallels between TB and Johne’s disease. Frustratingly, we have a very successful national control plan for Johne’s, but an emphasis on testing for TB with very little focus on prevention.
Dick pointed out that only three countries use the Avian and Bovine comparative TB test. The rest of the world just use Bovine Tuberculin, culling animals with a bottom lump (of any size) on day two.He used a barrage of other tests for TB on any animals that had a bottom (bovine) lump whether they passed the traditional skin test or not. Staggeringly, 81% of these animals were positive to at least one of the alternative tests! This doesn’t suggest that all of these animals were infectious, but it does show just how many animals were infected with TB and probably had it sitting latent within their white blood cells.

Should cattle that pass TB tests but produce a bottom lump be regarded as TB risk animals in the same way that J2-4 cows are with Johne’s disease?… The same risk factors of stress, diet change and concurrent disease which precipitate clinical Johne’s in cows are believed to be involved in turning latent TB cows into infectious reactors.
It was clear how little we truly understand about the transmission of TB. Traditionally viewed as a respiratory disease, why doesn’t it behave like RSV, IBR or any of the other respiratory pathogens? In his research, Dick found nothing in saliva samples but he did find up to 1000 TB bacteria per gram of faeces from cows that had passed the skin test but had bottom lumps. To put this into perspective, it only takes about 10 bacteria to infect a calf with TB. So 1000 bacteria per gram from cows who were producing 60kgs of dung per day is a lot of potential TB! We then often spread that slurry all over the farm for the herd to graze…..

There were some very radical and challenging ideas presented. Possibly the most easily applicable measure is to take time while TB testing to record all of the animals who generate a bottom lump. Regard these as “at risk” and discuss their management with the vets, (in many other countries they would have been culled).
Duncan and Richard have both completed their BCVA TB advice accreditation and from May Duncan will be part of the TB Advisory Service (TBAS). As part of this, he will be providing government-funded visits to look at biosecurity and other control measures to reduce the risk of TB outbreaks on your farms.